This week I got out on my first work trip, since probably August 2019. I started a new job last year, about a week after the world shut down for the pandemic, so work trips have been on hold for quite some time, that and the last employer stopped my travelling, so I hadn’t been on the road for work in quite some time. It was great to get out and meet some fellow employees and customers face to face.

Fortunately for me the trip was to Franklin, TN, which isn’t too far from Lynchburg, so I turned the work trip into a little fun too. Before heading down, I signed up for the Angel’s Share tour on Thursday morning. Wednesday after the work meetings were over I drove around Franklin TN a bit and did some whiskey hunting, checking out the local liquor stores to see what I could find. I ended up picking up a bottle of Wheeler’s Raid, which is a local whiskey out of Nolensville, TN I believe, on the recommendation of a coworker.

I also managed to find a bottle of the Jack Daniel’s Tennessee Tasters’ Series High Angel’s Share sitting on a shelf. I jumped at the opportunity to buy it, I wish I had a picture of the receipt, I honestly can’t recall what I paid for it, it was either $42 or $65. Either way, the High Angel’s Share Tasters’ is one of the hardest to find, and I found it to be an excellent drinker, so picking up another one was worth the price. I did stumble on another bottle of it at Celebration Liquors in Lynchburg later, but they wanted $150 for it.

After hunting around a few stores I met up with a lady named Debbie who I had been speaking with on Facebook for over 6 months. She had reached out late last year when I had posted on a thread that I had a 2019 Holiday Calendar that I would be willing to sell/trade. I told her I would hold on to it for her, and when I made a trip out to TN (originally planned to go in December) I would bring it for her. Earlier this year I reached out and asked her to try to find me the latest two Tennessee Tasters’ bottles, the Jamaican Allspice and the 14E19 “Twin” Blend | Whiskey. The Jamaican Allspice bottle was one I was pretty sure that I could find, but the Twin blend was going to be harder, as it was rumored to be a much smaller release

Debbie came through, we met at a gas station and exchanged prizes had a nice chat about all things Jack Daniel’s while there. I mentioned that I had picked up the Angel’s Share bottle and told her that I thought there was one more there if she wanted it, I really hope she was able to get it!

From there I headed south towards Lynchburg, I had grand visions of trying to be down there around Sunset to get some photos, unfortunately those visions weren’t quite met though I did get some decent shots you can see below. I got down there a little later than I had hoped, and being down in the valley/hollow sunset is kinda hard to grasp due to all the shade from the hills and trees. I did spend quite a bit of time driving around the hills of Lynchburg getting to see some areas I’ve never seen before. I came across one field of vegetables that had a large group of menonite women/girls sitting in a circle. It really would have made the coolest picture, but I didn’t want to be the creepy guy taking photos of them in a field so I just kept driving by.

As I was passing through a small town of Petersburg, TN I stopped to take a photo or two of the town square. I talked to a local artist who was out walking his 8 month old shepard/lab mix Skippy. We talked for a while, he does patriotic veteran based art that is used I believe in VA hospitals to cheer up the vets. He apparently he only moved there a few months ago, but he was very approving of the town. A car pulled up and said hello to Skippy, small town, everyone knows everyone, including the dogs. They asked me if I was going to move there. Pushy people these Petersburgians.

Wednesday morning I once again had visions of getting up super early and trying to see if I could find any cool places for sunrise shots around Lynchburg. Before finally turning out the lights near midnight I decided that simply wasn’t going to happen and I set my alarm for a more realistic 630am. I got up and hit the road, mostly going against traffic down to Lynchburg and arrived around 815am. The visitor’s center didn’t open until close to 9am so I wandered around the front with my camera looking for some more shots.

The doors opened shortly before 9am and everyone started getting checked in for their tour tickets. I made a quick pass through the White Rabbit Bottle Shop to see what they had, so I could make sure I was “ready” after the tour to pickup what I needed.

The tour had 17 folks on it, we took a shuttle up to the “starting” point and were informed that some of the tour had been modified due to Covid, as well as due to an event that was occuring later that day. We would not be going into the barrel house and doing our tasting there as normal, we would be doing our tasting in Bethel Church instead, an apparently rare event.

The tour was great as usual, though we didn’t get to go into the distillation area and also didn’t get to go through the bottling area :(. One day I hope to get to walk around the distillery with an employee who can get me into areas tours don’t normally go. We started the tour near the rickyard where they make the charcoal used for mellowing the Tennessee Whiskey. They were making charcoal at the time, which is always a cool experience to see. 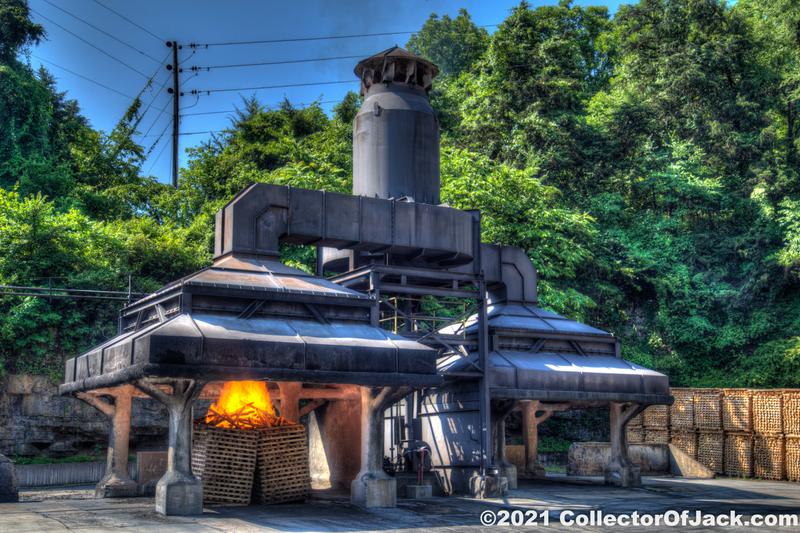 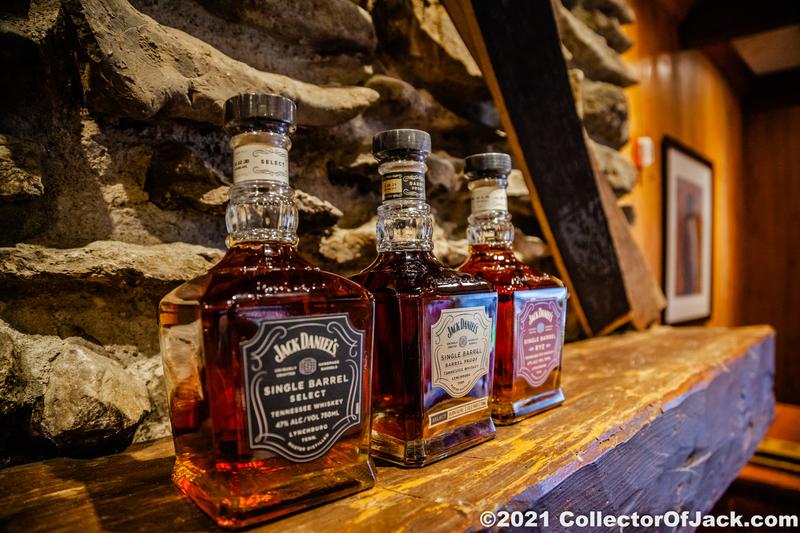 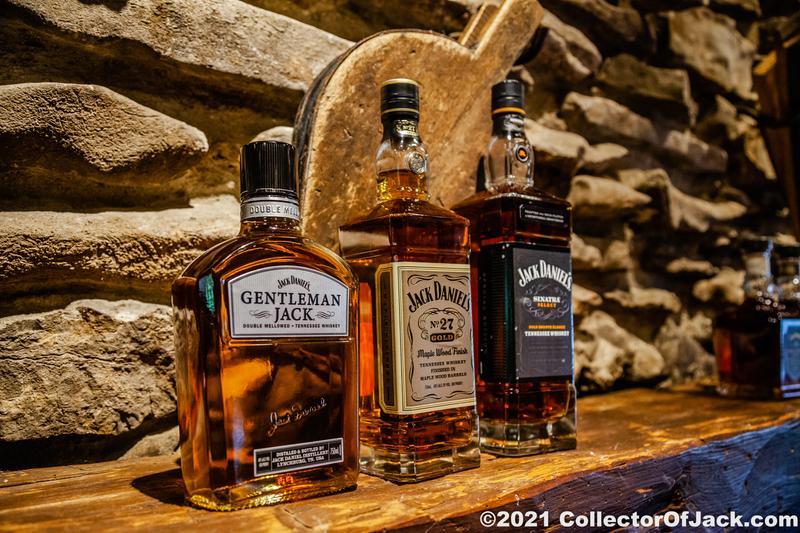 From the tasting we did get taken into the barrel house that was part of the ceremony later in the day, but only into the barrel storage area, not into the tasting area for a quick introduction to some of the barrels there. Our tour guide told us they were all “green” barrels, everyone assumed that meant Green Label, but later in the day that barrel house was renamed to be The George Green Barrel House, so I wonder if there as more to that.

After the tour I paid my visit to the White Rabbit again, this time picking up 3 more Tennessee Tasters’ bottles. Two of the “Twin” and one of the Allspice, rounding out 3 of each of those. One for drinking, one for collecting and one for trading in the future. I also paid to have my rocks glass that I received from the tour engraved with the date and type of tour, to put on display in the collection.

Next up for me was a visit to the Squire house, the old Motlow house on the property there at the distillery. The Tennessee Squire Association is in its 65th year, having been founded in 1956. I became a squire last year like a week after my dad and I visited the distillery, so this was my first trip as a squire. I got to meet and shake hands with Randall Fanning, and sit and chat with him for a while there in the house. I picked up some Squire specific merchandise and got a copy of Chasing Whiskey signed by Randall and then decided to hit the road back home to St. Louis.

On the way home I made a quick stop by the Nearest Green Distillery to see if I could talk my way into anything there, they had/have their grand opening today (6/19). The place was packed with cars, and workers everywhere, so I pulled into the lot, to a quick photo (below) and then got back on the road.

I did make one last liquor store stop at Liquor Planet in Murfreesboro. I had stopped there a couple of times previously, one of the St Louis Bourbon Society Admins has posted a photo from there the prior day with a particular Jack Daniel’s Single barrel that I wanted, so I stopped in to pick it up. It was just a store pick, but it has a picture of Randall Fanning and Goose, along with one other person (Will perhaps?) applied via a decal, I wanted to add that to my collection so I picked one up.

The rest of the trip was uneventful, which is always nice. Until the next trip, this one will hold me over.

Chris has been collecting Jack Daniel's for 23 years and uses this site to document his collection.